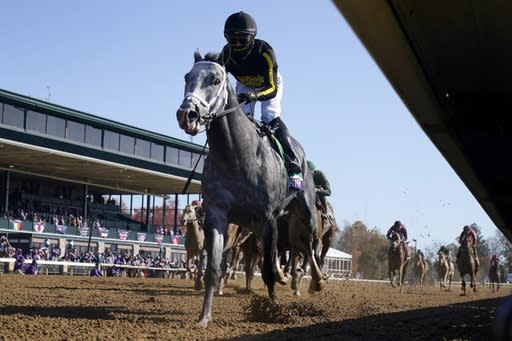 There are plans for Knicks Go, and there are hopes.

The plan for Knicks Go – the likely favorite in Saturday’s $3 million Pegasus World Cup Invitational at Gulfstream Park in Hallandale Beach, Florida – is to keep him racing throughout 2021. And the hope, of course, is that he wins the Pegasus, which would significantly add to his asking price when it’s time to begin his stallion career.

But a Pegasus win might also mean he heads to the stud farm faster than anyone anticipated.

”This is a very important race,” trainer Brad Cox said in an interview done virtually with Gulfstream Park leading up to the Pegasus. ”Not only is it a great purse, but it’s going to add a lot of value if he’s able to win the race. … If the right offer came up, it would be a possibility that he would be retired. The better he runs, the better that possibility is.”

The first three winners of the Pegasus – Arrogate, Gun Runner and City of Light – were retired for stud careers; Arrogate died last year after neurological problems. And last year’s winner, Mucho Gusto, is probably headed for a stud career after being retired earlier this month after a ligament injury was found.

Arrogate still ranks as the leading moneywinner in North American racing history with $17.4 million in earnings. Gun Runner is third with just under $16 million and City of Light ranks 50th at nearly $5.7 million.

Knicks Go has won about $1.35 million. A victory Saturday would more than double that total.

”It’s a very prestigious race,” Cox said. ”It’s not been around a long time, but obviously with the likes of Gun Runner, Arrogate and City of Light, basically champions have won this race. It means a whole lot. It’s a race that can make a stallion and we’re still trying to do that with Knicks Go. He’ll be a stallion at some point.”

If he runs to potential Saturday, that point could come faster than Cox anticipated. And it would add more of a spotlight onto what Cox has managed to do over the past three years or so as well.

Cox started training in 2004 and in his first 14 years, combined, he picked up 780 wins with purses totaling about $26 million in purses.

Knicks Go will have to go an extra furlong Saturday; the Pegasus is 1 1/8 miles. The top competition should come from Code of Honor, which has multiple Grade 1 wins including the 2019 Travers at Saratoga, and Tax – the 5-1 third choice in the morning line behind Knicks Go and Code of Honor.

Rafael Nadal rallies from set down to advance in Barcelona

Rafael Nadal rallies from set down to advance in Barcelona