Heat’s Duncan Robinson makes 3-point history in Game 2 win, shows how little room for error there is vs. Miami 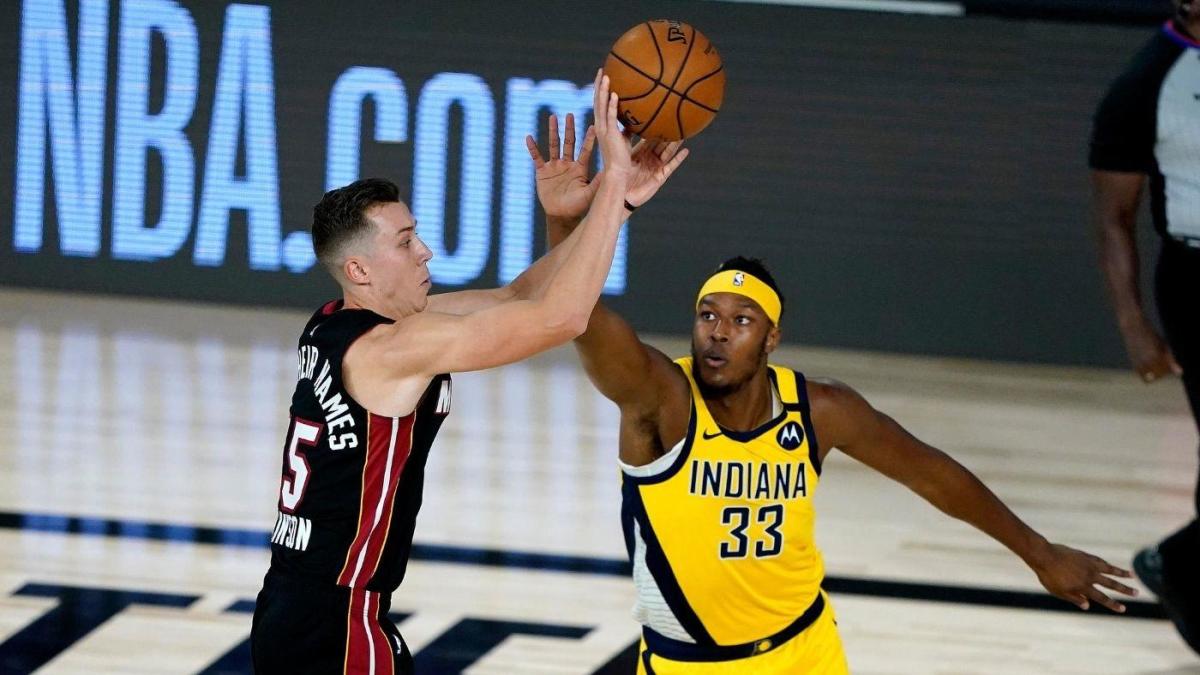 The Miami Heat needed some fourth-quarter heroics from Jimmy Butler and Goran Dragic to pull away from the Indiana Pacers in Game 1 of their first-round series, but that wasn’t necessary for Game 2. Even with Victor Oladipo cleared to play for the Pacers after his eye injury, the Heat never trailed in the second half and coasted to a 109-100 win to go up 2-0.

A big reason why was the play of Duncan Robinson. The second-year forward’s emergence as a key player for the Heat, and one of the most dangerous shooters in the league, has been one of the best stories of the season. In Game 2, he drained 3-pointers on the first two possessions, and never looked back, finishing with 24 points on 7 of 8 from downtown.

His seven 3s tied a Heat franchise record and put him in a club with Finals legend Robert Horry as the only two players in postseason history to ever hit seven-plus 3s without even attempting a two-pointer. Admittedly that second “record” is extremely niche, but it’s a neat little note nonetheless.

Robinson’s history-making performance helping the Heat take a commanding 2-0 lead in what was supposed to be one of the most competitive first-round series is the clear headline here. But looking closer at Robinson’s performance highlights an important point about this Miami team.

You wouldn’t really think of them as an offensive powerhouse, but they finished seventh in the league with an offensive rating of 111.9. Pulling that off without having a single player average 20 points per game is an impressive feat, and they did it by shooting the lights out of the ball. Led by Robinson, they hit 37.9 percent of their attempts from 3-point land in the regular season, second only to the Jazz.

Among players who are part of their playoff rotation, Robinson, Jae Crowder, Kelly Olynyk, Tyler Herro and Goran Dragic all shot at least 36.7 percent from deep, and that much shooting gives you little room for error when trying to defend them. One little mistake and you’re probably going to give up an open 3 to a good shooter.

Robinson’s 3s from Game 2 exemplifies this problem. Let’s start with the first possession of the game. Look at all the work Oladipo does chasing him around screens to start. Then, in trying to show help on the drive, he takes one step too many towards the ball, and Robinson hits the 3. Not terrible defense by any means, but also not enough against Robison.

Next time down the floor, Dragic misses an open 3 off the dribble hand-off, and the Pacers had a chance to get a stop despite not playing great defense initially. But they fail to get the rebound, as Crowder carves out some space, pulls it down and kicks it out to Robinson for the open look. Another little error gets punished.

Here’s another example from early in the second half. The Heat swing the ball around the perimeter, and Oladipo flies by on the closeout. Robinson reads that, dumps the ball down to Butler instead of shooting, then relocates for an open 3. Great effort by Oladipo, but just a slight bit over-eagerness results in an open look.

Lastly, we’ll look at this one from the first few minutes of the third quarter as well. The Heat try to push the ball in transition, and as Oladipo tracks back he gets tangled up with Bam Adebayo and they both crash to the floor. That leaves no one anywhere near Robinson, and he gets what’s essentially a layup for him. This was just pure bad luck, but again the Heat take advantage.

All told, there’s nothing egregious in any of these clips. No completely blown assignments or bad effort, but it doesn’t matter. The Heat, and Robinson in particular, are such elite shooters that there’s no margin for error when defending them.