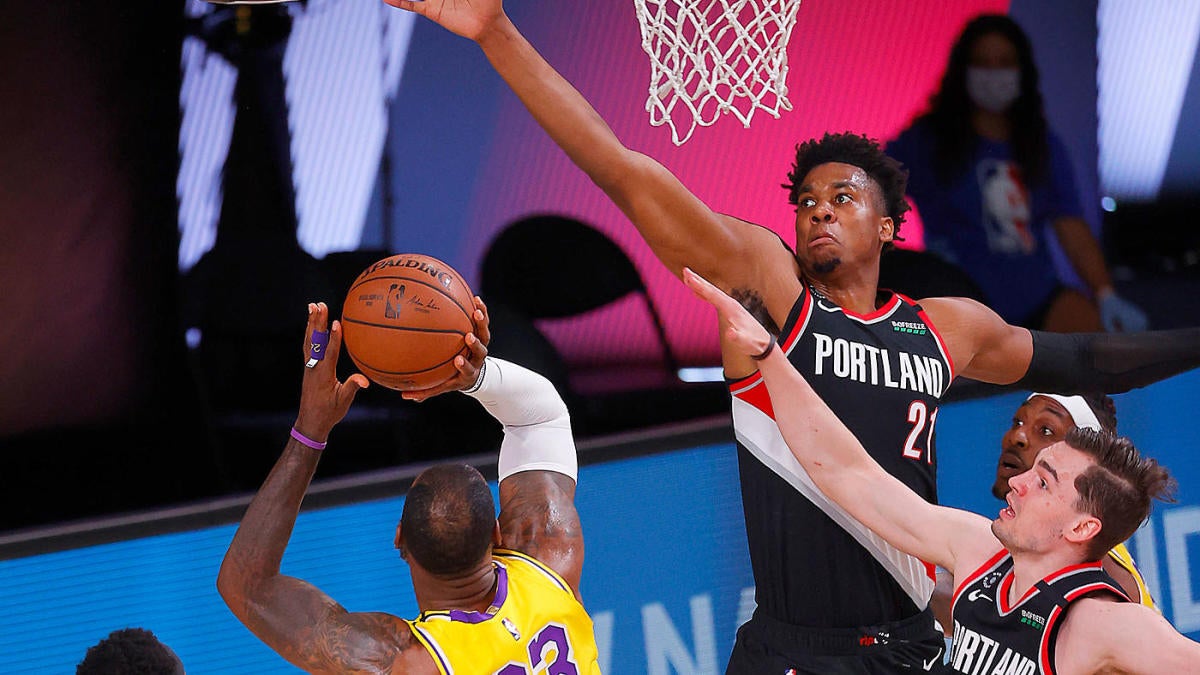 Being everyone’s favorite upset pick and actually pulling off an upset are two entirely different things. The Trail Blazers actually pulled it off Tuesday night, besting the top-seeded Lakers 100-93 to take a 1-0 lead in their first-round series. Portland hasn’t won anything yet, of course. It has to do this three more times to truly pull off the stunner and eliminate the Lakers, which still feels unlikely. But it’s noteworthy, at least, that the team that wins Game 1 of a seven-game series goes on to win the series over 75 percent of the time.

Perhaps more surprising than the Blazers beating the Lakers was how they beat them. One had to assume the Blazers would have to win a shootout, but instead they held the Lakers — or the Lakers held themselves, however you want to look at it — to 93 points. Had you suggested the Blazers would win Game 1 while only scoring 100 points, you would’ve sounded crazy,

Portland stuck to a disciplined defensive scheme, squeezing the middle (you’d regularly see up to four bodies clogging the paint) and forcing the Lakers, a bad shooting team, to make 3-pointers. It worked. The Lakers shot 5 of 32 from deep. To be fair, a lot of those shots were wide open, which could lead to a stark turnaround in Game 2 and/or over the remainder of the series if just a few more go in moving forward. Consider this:

Per Second Spectrum, “shooting luck is measured as the difference between the points a team actually scored and the points we’d expect it to score given the quality of shots, number of free throws, and the players who took those shots.” In other words, the Lakers are probably going to see a statistical correction with their shooting moving forward. But guess what? The Blazers, who shot 39 percent as a team, will probably shoot better, too.

Either way, the Blazers have to live with peripheral Lakers shooters getting open looks. They don’t have individual matchups to thwart LeBron James or Anthony Davis. They have to swarm the stars and prioritize the paint and largely concede the rest. This has always been the plight of the underdog. You can’t control everything when you’re playing at a deficit to begin with

What the Blazers can control is their own offense, which wasn’t collectively clicking Tuesday night but showed up huge in the most pivotal stretch of the fourth quarter. The simple truth is if the Blazers can keep games close, they have more shotmakers to turn to in the end. So that’s the blueprint: Get the game to the last five minutes, and take your chances that Damian Lillard and company are going to keep hitting huge shots. Mix in a few timely defensive stops, and poof, you have an upset.

With that in mind, here are the five biggest plays from Portand’s Game 1 victory.

To me, this was the biggest shot of the game. It came at the 7:38 mark of the fourth quarter. The Lakers, now up six, were in the middle of a 13-2 run. The Blazers had scored just two points over the previous six minutes, and the game, along with the ball on this possession, was slipping away. Somehow, it found its way into the hands of Lillard, who drilled a wing triple to steady a very wobbly ship.

In real time, that felt like a must-make shot. Lillard wasn’t getting clean looks, and the Blazers could not generate any offense as a result. Again, the Lakers were about to run away. This shot, albeit momentarily, pulled them back in.

After Lillard hit the 3 we just talked about, LeBron James immediately answered with one of his own to extend the Lakers’ lead right back to six. Again, it felt like the Blazers were on the ropes and had to answer. And CJ McCollum delivered.

That is a tough shot. Absolutely vintage McCollum off the dribble, and vintage Blazers, who rely on a steady diet of tough one-on-one shots that most teams do everything in their power to avoid taking. The Blazers not only take them, they make them. Now the Lakers lead was back to three. A minute later Lillard hit a 30-footer that ties the game, then McCollum finished a wrong-foot runner to give the Blazers the lead just a few minutes after they looked like they were about to lose their grip.

Hassan Whiteside takes a lot of flak, and you still have to hold your breath every time he touches the ball offensively, but we have to give credit where it’s due: He made some monster defensive plays on Tuesday, none bigger than the block he made on LeBron with just under 3:30 to play in the fourth quarter and the game tied at 89. The block alone would’ve been big enough at that juncture, but when Lillard immediately drilled a 30-footer on the other end to give the Blazers a lead they would never relinquish, it became the biggest sequence of the game.

In an alternate universe, Whiteside doesn’t make this block, LeBron finishes the layup to give the Lakers the lead, Lillard doesn’t make the 3 on the other end, and the Blazers are back on the ropes down two rather than up three. With three minutes to play in a tied playoff game, a five-point swing is, suffice it to say, rather significant.

You could definitely argue this was the biggest play, or sequence, of the game. For me, I do not believe the Blazers would’ve even been in this position had Lillard and McCollum not hit those previous 3-pointers to keep the Lakers close. If you’re down eight or 10 points, Whiteside blocking one of LeBron’s shots doesn’t mean so much.

After seeing their late deficit grow to six (via a Carmelo Anthony 3-pointer we’re about to discuss), the Lakers had crawled back to within two with a minute and a half to play. As they say, plenty of time. One more stop and the Lakers would’ve been feeling very good with a chance to tie or take the lead on the other end with under a minute to play. Gary Trent Jr. didn’t let it get that far.

Throughout the bubble, the Blazers have had numerous peripheral players make huge shots in huge moments. It’s gotten to the point where you’re almost surprised if they don’t make these game-swinging 3s. Trent is shooting 48 percent from three in the bubble, and this was his biggest shot of all. It pushed the Blazers’ lead back to five and the Lakers never got close again.

5. Melo from the left wing

Carmelo Anthony didn’t have a great shooting night in Game 1, finishing with 11 points on 3-of-11 shooting. But he was again an integral part of everything the Blazers did, chipping in with 10 rebounds and five assists. And when it came time to knock down a game-changing shot, as he’s done throughout this bubble run, he was ready to deliver.

As you can see, that shot put the Blazers up six with 2:33 to play. Yes, the Lakers eventually cut the lead back down to two before Trent officially ended it, but when Melo hit this shot, it was the first time that you actually said to yourself: “Wow, the Blazers are actually going to win this.” A few minutes later, they had officially done exactly that.