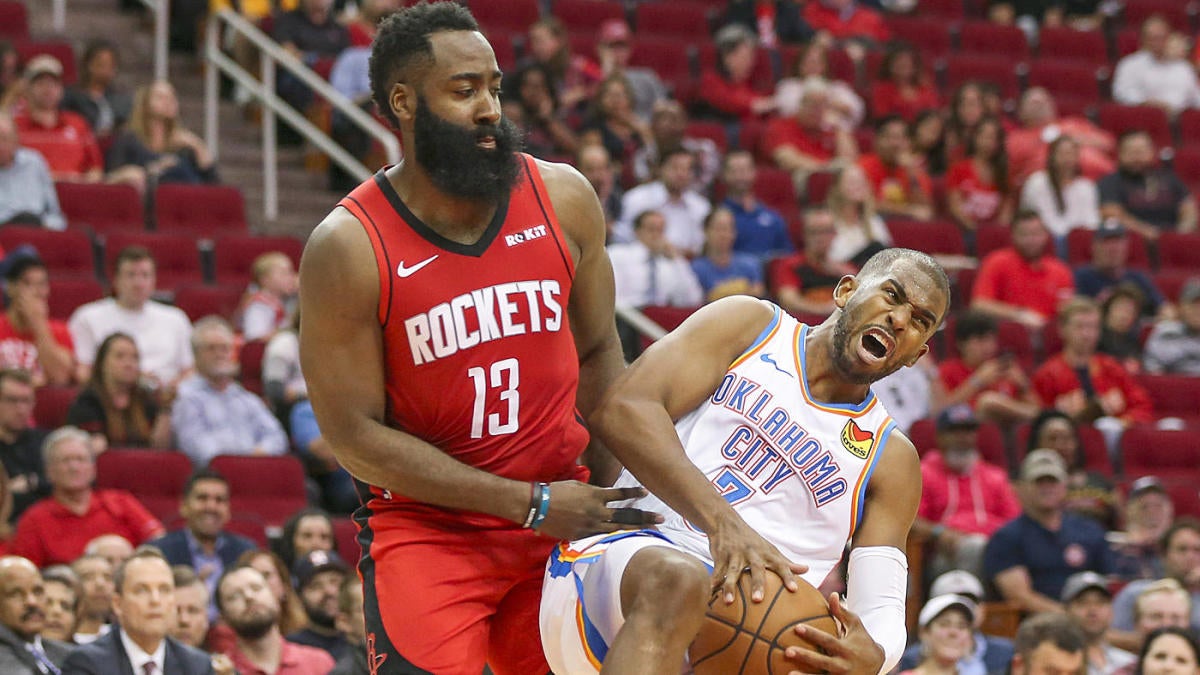 The Houston Rockets fancy themselves title contenders, and if you don’t understand why, just watch their wins against the Milwaukee Bucks and Los Angeles Lakers. At their best, James Harden and Russell Westbrook are unguardable, and their defense causes chaos and confusion.

This is a matchup between two teams that changed their respective identities when they swapped point guards last summer. Houston changed its identity again when it added Covington, and Oklahoma City exceeded every expectation by virtue of simply staying together.

1. The question of Westbrook’s quad

This series starts on Tuesday, and we don’t know what role Westbrook will play in it. He’s dealing with a quad injury and will be out for the first “few” games, according to the Houston Chronicle’s Jonathan Feigen.

If and when he comes back against his former team, what version of Westbrook will we see? He has been known to bounce back from absences much quicker and better than anticipated, but he’s also 31 now and a quad injury is never something to mess with. If he returns too soon and doesn’t have his usual burst, it will be painfully obvious.

In the meantime, it is no mystery how the Rockets will adjust. Harden’s usage rate will skyrocket — it was 42 percent without Westbrook in 1,048 minutes this season — and Houston will hope that it can make up for what it loses in transition with improved spacing. When Harden is on the bench, the playmaking responsibility will fall to Eric Gordon, who returned from an ankle injury for Houston’s final two seeding games, and Austin Rivers, who scored 41 points in 33 minutes against the Sacramento Kings a week ago.

In non-garbage-time minutes with Harden and Westbrook both on the bench this season, the Rockets scored just 103.9 points per 100 possessions, which is a little worse than the Golden State Warriors’ league-worst offense. But this is a weird sample, with lineups featuring a bunch of players who either aren’t in the rotation or aren’t even on the roster. Gordon was hardly ever himself in the regular season, due to a series of injuries, and he missed six of the 17 games in which Harden or Westbrook sat out. (On Jan. 27 in Utah, both sat and Gordon scored 50 points, but he was kicked in the shin, an injury that set him back for weeks.) This is his fresh start.

Before the season started, in a Sports Illustrated story by Rob Mahoney, Clint Capela described Chris Paul as a guard “who really needs a screen.” This quote is now laced with layers of irony, as Capela, now a member of the Atlanta Hawks, traded in February in the deal that established the Rockets as the most unconventional team in the league.

“The big became almost like a double-team escort,” general manager Daryl Morey told Mahoney in a recent story for The Ringer about Covington and Houston’s smallball revolution.

Now the 35-year-old Paul faces his former team, the one that switches more screens than any team in the NBA. This is not the context in which he is most effective, and on a possession-by-possession basis he’ll have to choose between hunting matchups that he finds favorable for himself or letting Dennis Schroder, Shai Gilgeous-Alexander or Danilo Gallinari go to work. If these games go down to the wire, every crunch-time decision he makes will be dissected to death.

The Thunder might be better in the playoffs than they were in the regular season simply because their five best players get more minutes. Their closing unit was the best lineup in the league in the regular season, and, if Luguentz Dort’s knee sprain isn’t serious, coach Billy Donovan could keep the rotation short, with only Schroder, Nerlens Noel and one other player seeing any playing time off the bench.

The flip side, though, is that there is a massive drop-off if any of Oklahoma City’s main guys isn’t available. This could come into play immediately with Dort, and it makes it important for the Thunder to avoid foul trouble, even with Harden using every trick in the book. Fortunately, this is a strength: They kept opponents off the free throw line better than any team invited to Orlando.

Beyond that, if Steven Adams can’t hang with Houston’s five-out offense (and can’t make it up on the offensive glass), OKC isn’t set up to play small. Gallinari could shift to center, but the wings who would replace Adams are all iffy shooters.

On the other side, Mike D’Antoni, the king of the seven-man playoff rotation, told The Athletic’s Kelly Iko in June that the Rockets will go nine deep this time around. We’ll see if he sticks to that with Westbrook out — by my count, there are only eight active players he seems to trust: Harden, Gordon, Danuel House, Covington, Tucker, Rivers, Ben McLemore and Jeff Green. (I remain interested in the potential contributions of Luc Mbah a Moute, but it’s worth noting that DeMarre Carroll got more run in the seeding games.)

The big questions: Will House stay steady? Can McLemore hold up defensively? Can Green make his 3s consistently? If those three play well, the Thunder will be in trouble.